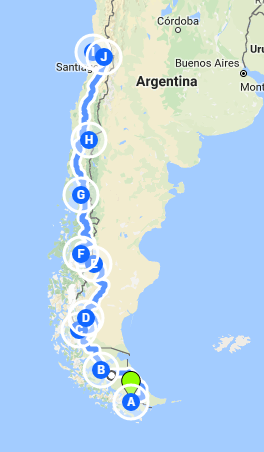 Our route through Chile can be divided into three stages.

In the first stage we visited Punta Arenas, Puerto Natales and the spectacular park of the Torres del Paine.

In the second we dared to drive almost all of the famous Ruta 7 or Carretera Austral.

And in the third we crossed the X  region, which was full of lakes, rivers and volcanoes until arriving at  Santiago, the capital of this country.

We arrived at Punta Arenas by ferry from Tierra del Fuego and settled in the parking of the port, which would become our home for a week! We didn’t see much of the city except from its shops; we had been looking for some things for Cactus and in the duty free zone of this city we found everything! Compared to Argentina things here are very cheap! We also found a  injector specialist at the Bosch service, Juan Frochoso, and took the opportunity to change them. We reduced the consumption of 20 to 15 liters to 100km 🙂 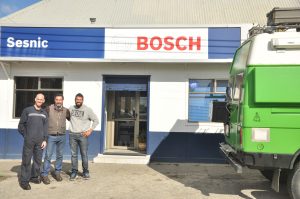 In addition to shopping, during our days here we formed a great traveling family: Neill, an American traveling in a VW T2 with his dog Harley, Hannah and Hamish traveling in a Mowag and Anthea and Mike traveling in a Pathfinder, the four of them were from New Zealand. We shared good times and enjoyed rich roasts! 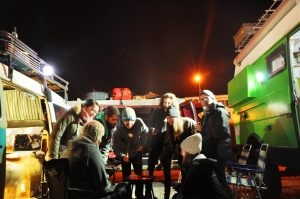 From there we continued to the beautiful city of Puerto Natales and visited the Torres del Paine national park, a magical place! We were 4 days in the park and had a spectacular time; every day the sun shone and it wasn’t windy, although the nights were very cold (up to 0ºC) but the heating of Cactus worked great 🙂 The most famous route of the park is a W-shaped, but we realized it was necessary to sleep in a tent several days and as we were not so comfortable with the temperature… we only did 2 trekkings, the two ends of the W. The first was the path that leads to Glacier Grey. This glacier is part of the Southern Ice Fields and its mass of ice is 6 kilometers wide and more than 30 meters high and is divided into two fronts. Although is not one of the highest, it is one of the most extensive glaciers with approximately 270 km² of total surface. The other trail we did is the most famous of the park’s treks, which goes to the base of the Torres del Paine. It was quite hard with 18 km of route and 700 meters of slope, but it was worth it! When we got up there it seemed that the time stood still before those giant towers unperturbed to the passage of the years and the effects of the time. There are no words to describe the beauty of that place and what it makes you feel. The towers are formed of granite and the surrounding mountains are sedimentary rock. In front of these there is a turquoise blue lagoon in which all this beauty is reflected.

The National Geoghraphic named this park “the fifth most beautiful place in the world” and other sources also speak of it as “the eighth wonder of the world”.

At this point of the trip we were very happy and we felt very fortunate to have visited this place.

At this point to head north through Chile there are two options or take a ferry and sail through the fjords or re-enter Argentina and drive to the Roballos Pass (the further south) or the Chile Chico Pass. We chose to cross Roballos to see the maximum of the Carretera Austral, the ferry would have been impressive but it was out of budget and we still had to see the most famous of the glaciers, the Perito Moreno glacier of Argentina. During our visit to El Calafate where we slept before the visit to the glacier, we adopted Perito! A lovely street dog that is now part of our family.

The Argentine part of the Roballos pass is composed of arid landscapes typical of the Patagonia of this country but not as flat as usual, this time we were surrounded by rocky mountains, some reddish and huge valleys full of nothing … We arrive at the border at night, we cross (for the first time with Perito) without problems and we stopped a few kilometers later in a zone of camping. When we woke up what was our surprise to see that the mountains that surrounded us were no longer arid, they were green, red and yellow, everything was full of trees and vegetation! We were in the middle of Parque Patagonia, beautiful place to spend the day of my birthday 🙂

We fall in love with the Carretera Austral and it seemed that we had chosen (by chance) the best time to visit this area, autumn was giving us a multitude of colors !! We enjoyed the beauty of the Baker River, on the shore of which we stopped to rest and met Pali, a Chilean guy on a camping trip, and Cedric, Emma and Marie, 3 French backpackers. We spent a nice afternoon and evening together, in which I even blew the candles!

We continue heading north and stop in the immense General Carrera lake where we visit its marble formations, the caves, the cathedral and the chapel. Another of the wonders of nature … Then we continue very slowly the route passing Cerro Castillo, Coyaique and Queulat National Park. Up to that point the weather changed and didn’t stop raining during the entire route. We couldn’t see the hanging glaciers but we saw hundreds of waterfalls and rivers, the force of the water making its way through all the corners of this jungle landscape.

Leaving apart the beauty of this place we have to warn that it isn’t an easy route, 75% of this is dirt or gravel, without a 4×4 vehicle you have to be very brave to drive it. We did 1000 km since we entered by Roballos pass and about 100km a day, and Cactus suffered a lot …

We finished this stage very tired and discouraged because of the new mechanical problems. A rotating cooling fan blade, the rev counter out of service, an increasingly strong noise in the cardan and some water leakage in the back of Cactus…

The third stage began in Puerto Montt where after catching a couple of ferries the Carretera Austral comes to an end. We thought that in this city we were going to find the solution to all Cactus problems but it wasn’t like that, in our search for spare parts we met Felipe and his lovely family, who helped us in what he could and invited us to his house to taste a typical dish of the area, the curanto. Thanks for everything to Hanna and Felipe!

After a couple of days in this city we received guests! The family of Jose came to visit us, ready to travel with us the route of the lakes and volcanoes of Chile.

We start in Puerto Varas from where we visit the volcano Osorno and the Petrohue Falls, which are very beautiful waterfalls inside the national park Vicente Perez Rosales. We also did a trekking (in the rain), in the Alerce national park, until we get to contemplate the thousand year old larch, a huge tree that has more than 3000 years of life.

Then we continue to Puyehue Lake, where thanks to Raul (owner of the cabin where we were staying) we took a boat trip and contemplated the volcanoes surrounding this place, Puyehue volcano, Casablanca volcano and Puntiagudo volcano. Due to bad weather we didn’t do any excursion through the forest, instead of that we relaxed in the hot springs of Puyehue thermal baths.

From there we continue north to Pucon, a very beautiful city located in a beautiful place between the lake and the volcano Villarica. Taking advantage of almost the first sunny day of the trip some of us dared to make the ascent to the volcano or at least to try … only Jose managed to climb to the crater. This volcano is 2847m high and is one of the most active in South America.

After Pucon we did a long stage of driving only stopping in a couple of places to sleep but we didn’t visit any remarkable places, the only remarkable thing happened to us in Curicó where the owner of the cabins where we slept surprised us playing the guitar and singing beautiful songs while we had breakfast. Thanks for that good time Guillermo!

And the last family weekend we spent it in Valparaiso and Viña del Mar. Valparaiso is a unique city! Is a disorganized city, built on hills, and overlooking the sea from every corner. Each house has its own style and its color and its streets are full of art, from huge graffiti to houses rehabilitated with workshops or theaters. Due to the great slopes of the city there are the famous elevators that are like funicular that take you from low to high areas and vice versa. We didn’t like that much Viña del Mar although we had a nice surprise at the seafront where we saw pelicans and sea wolves!

And now we have been already a week in Santiago repairing things … This is also part of the trip they say … but there are times when we fight, we are tired, we are cold, it rains and we don’t want to work in Cactus anymore!

Of course, we have met great people here, which are helping us in all that they can. Thanks to J for letting us stay for a few days in his workshop and to Fabian for taking us to all the repair shops … And thanks to the VW T3 club that invited us to spend a weekend at the beach where we could disconnect and we did great friends. Thanks to Alejandro for letting us camp in his beautiful “camping” in Pirque and thanks to Carlos and his family with whom we are now living in front of his house in Santiago.