We entered in Bolivia crossing the Andes, exactly through the Ollagüe Pass, located in the middle of nowhere and apparent not that crowded … there, no one was really interest in us. The customs officer who reviewed our passports didn’t look at us at all, but he only gave us 30 days of stay in the country, something that we found very strange because in all others countries we are always authorize to stay 3 months. The other officer in charge of the papers of the car (TIP) gave us the 3 months, and he checked Cactus only from the back doors … and that’s how we got into the desired Bolivia!
After 6 months of travel we finally turned the page and left behind the “ches” and the “pos” 🙂
We drive by sand paths without any signal and without GPS (tomtom doesn’t include maps of Bolivia in its world version…) only using the maps.me application from the mobile, which we can say that has saved our ass on more than one occasion. We arrived to San Juan, a very small town in which we only saw a couple of people, after asking in several places we got a shower in a hotel for 5 Bolivianos (less than 1 €) and a whole chicken for dinner which seemed fresh out of the chicken pen (I think it still had some feeders!) at that time I came back to think about vegetarianism…. 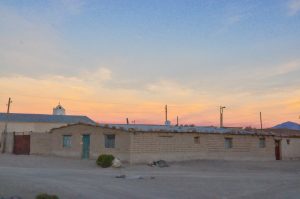 The next day we wanted to get to Uyuni and get ready for the Salar, get some map, to know what there is to see… We load fuel at “European” price in a private house and with canister, and ask the kind lady who attended us (which the first thing she did was go up to cactus to see how it was) what was the best way to get there and told us, without hesitation, that it was best to cross the Salar, which would be like catching the highway!
And that’s what we did, we continue along sandy paths to Tanil Vinto and there after paying 10 B (1,5 €) we enter at the famous Salar de Uyuni! We were impatient and expectant about how it would be, at first there was a well delimited dirt road that led into the Salar while the surface was covered with salt but mixed with earth and mud. We kept driving, the road disappeared and everything turned white, we were surrounded by salt! And the sun reflected very strongly everywhere. We put on the sunglasses and got out of cactus for a first contact with that landscape from another planet! The ground was white, very hard and covered with a kind of hexagonal shapes that only break in the roads by the marks of the cars that drive around. We took some photos and hallucinated and happily continue the trip. 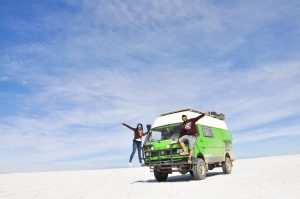 We drove and drove and the hours passed and the landscape remained exactly the same, the white of the salt contrasting with the blue of the sky and only somewhere on the distant horizon we could see some dirt.
We passed a few “pools” and excavations where there were a lot of trucks working and we thought they would be extracting salt but later we learned that what is extracted is lithium! Asian companies discovered under the Salar a great source of lithium and perforate to the deposits of this one to extract it. With lithium batteries, computers, televisions and various technological devices are manufactured, so it is considered a strategic resource for the future of industrialized nations.
Another hour passed and that seemed interminable, maps.me. didn’t know how to locate us correctly and our compasses didn’t work eather! Luckily a coach of the workers, saw us, stopped to ask where we were going and indicated the path that goes to Colchani, place from where you enter in the Salar when you come from Uyuni. On the way we saw many cars together in a distant place and we headed towards there, surely there was something interesting! As we approached we saw that it was the salt monument built for the Dakar rally, which has spent 2 years in this place. 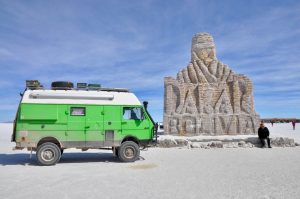 We left the Salar and arrived in Uyuni, we were surprised by the poor state of the houses and the streets, as the town receives hundreds of tourists every day, where all the money from tourist agencies? Probably some rich bigfoot who does not care about the locals … At night we meet Kelsey and Gui, our friends from Americano Frenchpress, and we camped with them in the Train Graveyard. At morning, we investigated the place together and took many photographs. Here there are many locomotives and abandoned railroad cars coming from an old railway route that united Uyuni with Antofagasta in Chile (formal time was part of Bolivia), carrying minerals. 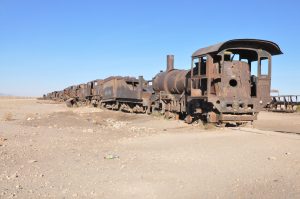 After the typical “vanlife” tasks, such as loading water, searching for a shower, research in the internet and loading fuel … We returned to the Salar and headed to the eastern end where the Tunupa volcano (5432m), the road became eternal! It is necessary to remember that the Salar occupies an extension of 10580km 2!!! At some point we stopped to eat, we were completely alone, surrounded by that vast white immensity… The most stunning views I have ever had during my time 🙂 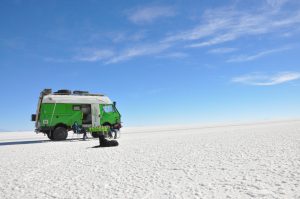 At last we arrived at the volcano base, but we couldn’t visit the mummies that are there because they celebrated a party in the village and it was closed (we saw many drunk people dancing and singing!) What we did enjoy was the scenery on the Salar shore, where we saw a large group of flamingos fishing in a kind of small lagoon that was there. It was starting to get dark, the light was amazing and we found our reflection! At the raining season, the Salar becomes a huge mirror, is difficult to know where the Salar ends and the sky begins. 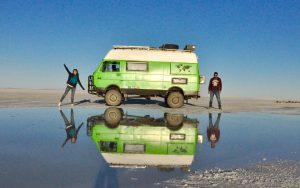 We enjoy the sunset from Incahuasi Island, the biggest of the Salar islands, which is full of giant cacti! And we went to sleep to another smaller island about 20 km, where we found Juli and Sam, other adventurous travelers who travel by motorbike and sleep in tent! We had a nice and quiet night… 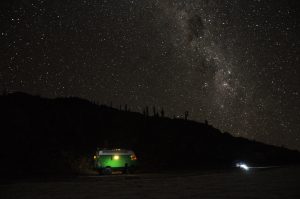 And the next day we continued marveling at the landscape, we made a walk between giant cacti and we took the typical funny photos playing with perspective.