Once past El Bolsón we faced one of the longest stages with nothing to visit, and when I say nothing I mean NOTHING, (except Guanacos of course, of these there are many!) From there to El Chaltén (1260km) we found only 3 small villages, Tecka , Río Mayo and Tres Lagos, at least wet could refill fuel…

The scenery was very deserted and monotonous but far away from being boring, it is breathtaking! There were times when we though we are on another planet, strange rocky shapes, huge holes in the middle of nowhere, round shaped shrubs that look like giant mushrooms and a spectacular sky!! Being on such a large plain the sky looks immense and very close, and makes you remember how little we are and how awesome the universe is. Much of this section of Route 40 is not paved and after the last rains it was not in the best conditions … but Cactus had a lot of fun driving through!

And after so many miles in “nowhere”, suddenly we changed the direction, we headed west and there we saw the Andes mountain range. Our arrival in El Chaltén was one of the best things of this trip, to get near those huge mountains presided by the Fitz Roy (3405m), until arriving there, to a small but charming little village, located at the foot of all those mountains. The pity was that only on that day the weather accompanied us and none of the following 3 days that we stayed there the sun came back. We made the hike to the Fitz Roy and only saw clouds … and also we went in boat through Viedma lake to approach the glacier with the same name but we couldn’t arrive because of the wind and bad weather … Another issue that we had to solve was a new noise that we heard in Cactus, we thought that the 4×4 had been blocked and we could not deactivate it, so to avoid damages we dismount the drive shaft that goes from the transfer case to the front differential, till we check it in a mechanic shop. So with a bit of bad taste in our mouth we followed our route to the south, the fear of bad weather was chasing us and we wanted to get to Ushuaia as soon as possible. 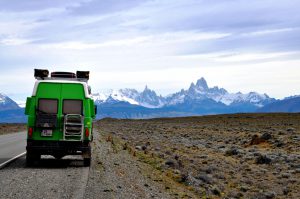 The next stop was Rio Gallegos, where we had the pleasure of meeting the Trailsurfers! They are a couple of Germans traveling in a vehicle like ours! And with whom we have been in contact since we bought Cactus and to which we are very grateful for their advices, recommendations and help. I recommend you take a look at his blog www.trailsurfers.net

This time the boys were reviewing the subject of the 4×4, which we thought was broken from the gravel road, after checking the differential and the transfer case, they came to the conclusion that the noises Cactus makes are normal. When the vehicle is cold the gears are not sufficiently greased and the movement generates a noise, but it disappears when everything is warm.

From Rio Gallegos we went to Punta Loyola, where we visited the ship Marjorie Glen, which was shipwrecked in 1911, after burning, on the beach of this place. And near there we also visited Cape Virgins, where we could see hundreds of Magellan penguins in their natural habitat and we learned a lot about them thanks to Gonzalo and the rest of rangers. Was really nice but the night we spent there was so far the worst of the trip!! With a wind of about 130km/h Cactus did not stop swaying and it was impossible to sleep, because of the noise, the movement and the fear that something would break!

The large island of Tierra del fuego is divided between Argentina and Chile, and although the most part belongs to Argentina, to enter by land you have to pass through Chile, passing the corresponding borders each time … So we crossed the border with Chile, a few kilometers later we took the ferry to the island and about 100 kilometers later we crossed the border with Argentina by the passage of San Sebastian. From there we continued down to Rio Grande where we slept and the next day we finally reached the end of the world! 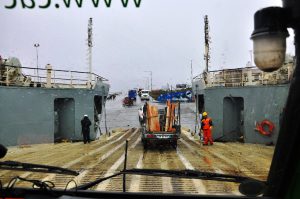 The famous Ushuaia, the most southern city in the world, is a picturesque city, with typical tinted houses, colorful and with very steep roofs, with a very tourist and commercial part and with a great port that communicates with the rest of the world and from which is accessible to Antarctica. After about 9000 kilometers we had gotten it, so we relaxed and enjoyed this place for 1 week. We visited the Tierra del Fuego National Park where we enjoyed beautiful autumnal landscapes and made small walks reaching nice smalls harbors  and also learned about the beavers and the damage that this non-native species is doing in the woods. Another day we hike to glacier Martial with the pleasant company of Janine and David, some Swiss friends with we meet in Cape Vírgenes. And to finish we drove the route J that crosses the “estancia” Harverton and Moat and ends in a military barracks from which it is no longer possible to continue, it is really the end!! The landscapes were incredible, pure nature; virgin, imperturbable … the day also accompanied us and we enjoyed a unique sunset…

On the way back we were told about another not so famous border crossing, the Bellavista pass, and because we like the adventure there we went! During the tour the landscapes were also very beautiful and we returned to have that feeling of being alone in the world … When arriving at the passage we surprised the officials with our visit, which left their house to attend us (it seems that a long time ago no-one was passing by here). We crossed a small bridge over a river and we were back in Chile. We drove to King Penguin Park where we stayed overnight and the next day we were able to see these incredible penguins! They are much bigger than the Magellan penguins and are characterized by their orange spots on the sides of the neck. After the visit we took a ferry from Porvenir to Punta Arenas, so we left behind the land of fire and started the route north! 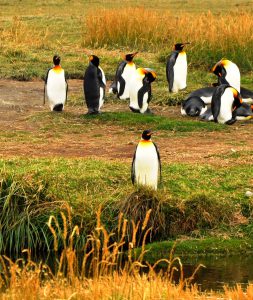 I don’t know if anyone will have noticed but we left a great attraction of the Patagonia to visit, the glacier Perito Moreno. We decided to postpone the visit as the weather was very bad, we were told that in April there are more sunny days and less fog, so we will visit it next month!