A few days ago we arrived in El Calafate with several mechanical problems and went to a workshop recommended by some traveling friends. When we arrive, the first to greet us was a black puppy with a white spot on the chest, beautiful and very demanding of affection. We asked in the workshop if the dog was from them and they say no, apparently a street dog gave birth there a few months ago, and he, probably the only puppy that survives, lonely, spent the day in the workshop, where from time to time received something to eat and some strokes, but none of the workers actually fit him, and at night he had to get out of there, so he was living in the street, and as winter approaches, it was not going to be easy to survive.

So after thinking a lot we decided to adopt it, the guys at the workshop very kind, took him to bathe, put a necklace on him and gave to us. We baptized him as Perito Gallego, first by the imposing glacier we just visited and second by one of the great people we met there, he was call “El Gallego” (like all Spanish or Spanish origin people).

The first few days went very well, every time we gave him to eat, he did not eat, he devoured! Surely with the fear still of not knowing when it would return to eat. At night he behaved very well, endured the poo until we took it out, it seemed to be taught! The only thing that cost him a little was getting used to traveling in Cactus. The first day we took him on an off-road with a lot of rattling and the poor peeled over… and then another day we left him alone for 5 minutes with the engine on and did the same, so we assume that only in situations of stress or fear… we have to be more aware and step by step try to pass the fear!

We took him to the vet where he confirmed that he is about 6 months old and explained the procedure to follow to have a healthy dog ​​and to be able to travel with him. We had to give him some antiparasitic tablets first and then if the dog reacted well, two vaccines, one of rabies and the other for 5 virus diseases, Parvo virus, Distemper, Adenovirus, Hepatitis and Parainfluenza. On Tuesday afternoon they put the 2 shots, because after asking we were told that there was no problem to manage at the same time … So we were almost done, just missing some paperwork to be able to cross the border with him. On Wednesday morning we went to Senasa, the National Service of Health and Agro-Food Quality of Argentina, where they gave us the International Veterinary Certificate for the export to Chile of domestic animals. That same afternoon, Perito vomited, he was down and he didn’t want to eat, we thought it would be a bit of a dip for the vaccines and that he would pass quickly, but the next day he was still the same … We started the trip since we couldn’t do anything there either, it was Holy Thursday and it was all closed. During the day he had diarrhea and he didn’t eat, at least he was drinking water normally. I was really worried. When we arrived at the service station of Gobernador Gregores, we meet Martin, the village veterinarian, and he kindly took us to his office and checked Perito. He told us that he had no fever but abdominal pain, he probably had an enteritis (like a gastroenteritis) but because he continued drinking water without vomiting was not so bad. We spent the night there and the next day we could only do 50 kilometers and we realized that Perito was much worse, he vomited every 2 hours, his eyes glittered and even the drops that had advised us to cut the vomit didn’t work, we stopped at a nice place near the river and spent Good Friday there very worried about the state of Perito … On Saturday, as we didn’t notice any improvement we returned to Governor Gregores and we took him to the vet, Martin was not there but his partner looked after us very well, the situation now was a little more serious because Perito was dehydrating, the best for him was staying there and give him serum and intravenous drugs. So with all the pain of the world and how you can imagine some tears, we leave him there until today, Monday, we have been able to pick it up. Now he drinks, eats and is happy as when we met him! It must also be said that he is a little fearful, I imagine his childhood was not easy, but we are going to give him the best family ever! We love him very much!! 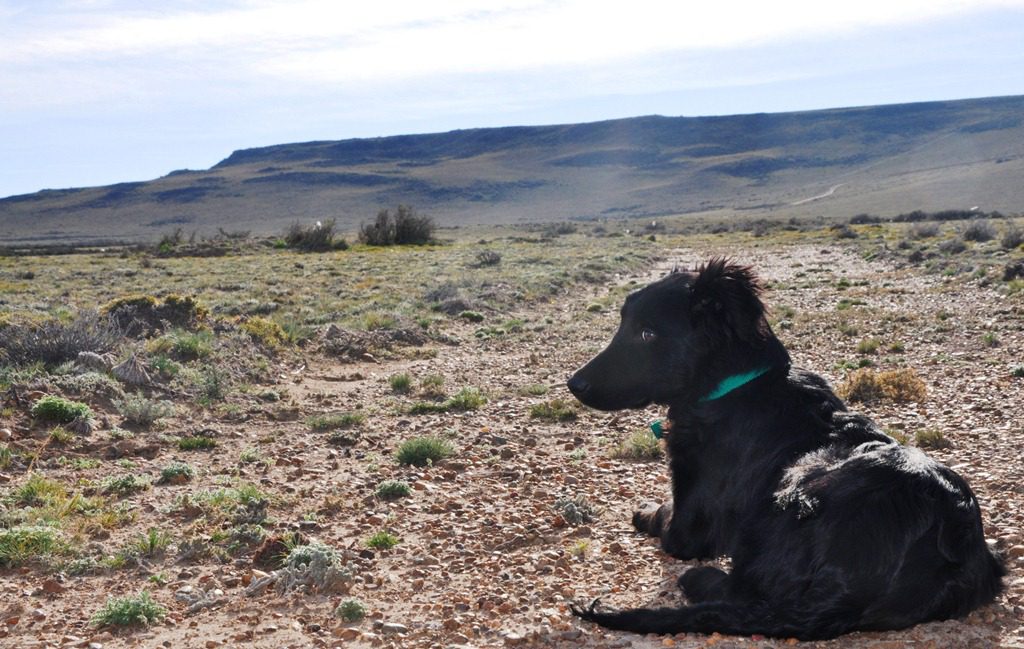 (If we could go back we would not put all the vaccines at the same time, although it is not known what the cause of the disease was, the vaccines certainly were involved, causing the disease or lowering the defenses, so if someone is thinking In doing something similar we recommend leaving time for the animal to get used to so much change.)